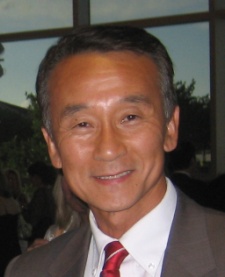 “I was born in Korea at the end of the war. Our family immigrated to Indiana in the early 6O’s. I was destined to be an American – I was born on the 4th of July and I have an uncle named Sam who was in the US Army. My grandfather was a thoracic surgeon and pathologist. He told me when I was in 3rd grade that he wanted me to be a doctor. So began the long road. I had no idea what and how long it would take. Along the way I was fortunate to have had mentors who at times turned my career on a dime.”

“A conservative town full of different Christian denominations and no crime or prejudice. The doors were left unlocked and everybody got along. I went from elementary through medical school in Indiana.

I interviewed at Henry Ford Hospital in Detroit at the suggestion of one of my classmates. It paid the most of any residency programs and had subsidized nice resident housing. So began my expansion out of Hoosier land, I was heading towards becoming a cardiac intensivist. I had a fellowship lined up for me. By divine intervention I met the Chairman of Ophthalmology, Dr. C. McCole, on a Saturday night while on call. He convinced me to change my career and become an Ophthalmologist. During my residencies at Henry Ford Hospital I began to expand my horizons in multiple directions. Henry Ford Hospital had the most ethnically diverse staff in the country. It was also a tertiary trauma hospital. I enjoyed putting eyes and orbits back together in the middle of the night. My Chairman recommended I do a Fellowship in Oculoplastic Surgery and comeback to work for him. I was fortunate to finish the program at the Bascom Palmer Eye Institute in Miami, FL. I have been working my way south ever since then.”

My Work with Dr. Lionel Smith at the Jackson, MS VAMC

“He subsequently introduced me to Baton Rouge via Cajun Fest. I became fascinated and fell in love with the culture. He then introduced me to LaHaye Total Eye Care a state-of-the-art eye care facility. Most importantly I was drawn by the dedication of the staff to provide the best possible eye care in a compassionate manner. Dr. LaHaye has collected an eclectic, talented staff that works together in harmony. I have been dubbed the “Asian Cajun.” This practice has the same values that were instilled in me at a young age and I feel very proud to be a part of the team here at LaHaye.”