Myopia is a very common condition that affects nearly 30 percent of the U.S. population. It normally starts to appear between the ages of eight and 12 years old, and almost always before the age of 20. As the body grows, the condition often worsens. It typically stabilizes in adulthood. 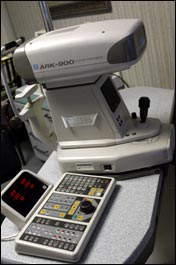 Many times, myopia is diagnosed during school screenings. Sometimes parents notice that their children are having difficulty seeing street signs or the television. Our staff will conduct a refractive evaluation to determine whether your eyes focus light rays exactly on the retina at distance and near. A visual acuity test will determine your ability to see sharply and clearly at all distances. Your eye doctor will also check your eye coordination and muscle control, as well as your eyes’ ability to change focus. All of these are important factors in how your eyes see.

Glasses and contact lenses are used by many for the temporary treatment of myopia. However, there are a number of vision correction procedures, LAHayeSIK™ LASIK for example, that can surgically reduce or eliminate myopia.

Other types of refractive errors include: nearsightedness, farsightedness and presbyopia.